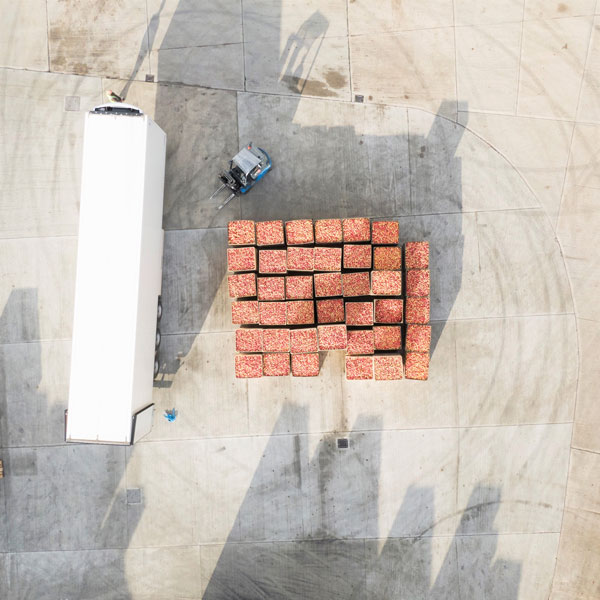 Cottage Farms uses a fleet of BYD ECB20 four-wheel counterbalance fork lift trucks to load and unload crates of apples outside in all weathers.

Cottage Farms is a privately-owned second-generation third-party packer of apples and pears. Based in Kent, known as ‘The garden of England’ for its lush rolling hillsides, agreeable climate and fertile soil, Cottage Farms sits in the heart of a region famed for its many growers of top fruit. It handles, packs, stores and outloads almost 4 million cases of top fruit annually from local and overseas farms, making it a year-round operation.

Of particular importance to Cottage Farms’ Managing Director Chris Browning is the environmental profile of the business. With a major UK grocery chain as one of its principle customers, Cottage Farms has invested considerable resource in recent years to ensure it leaves the smallest-possible carbon footprint. 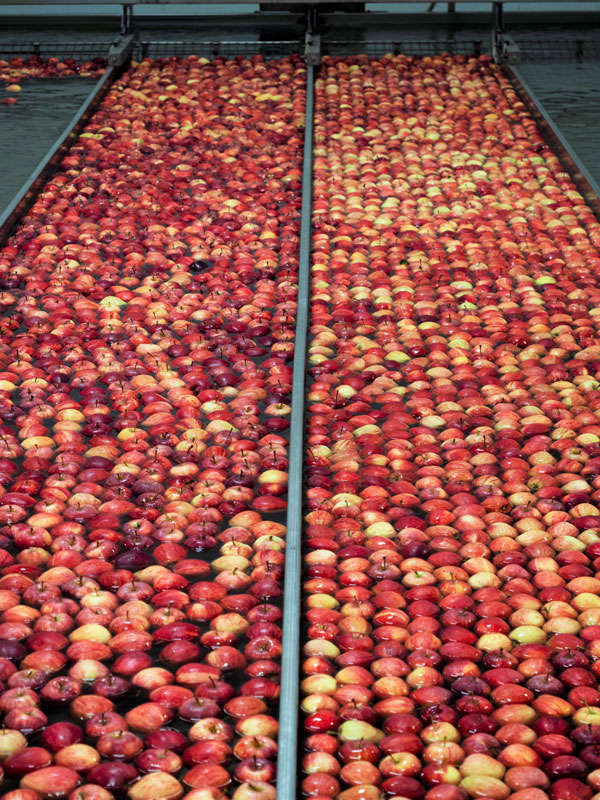 Operating from a £3.4m purpose-built facility opened in July 2014, Cottage Farms expanded in May 2019 with the addition of a cold store extension, providing around 1,500 additional pallet spaces in a high-bay mobile racking configuration, making 2,300 pallet positions in total. A significant area of the 90,000 sq ft facility’s roofing houses solar panels, providing up to 40% of the energy required to power Cottage Farms’ operations.

In 2018, with certain trucks in its existing fleet coming towards the end of their five-year hire contract, Browning met with Jon Monteath, Sales Executive for Cottage Farms’ local material handling dealer Stacatruc, to discuss renewing the trucks. It was at this point that he became aware of the many benefits BYD’s Iron-Phosphate battery-powered equipment could bring to his business.

In discussions with Stacatruc, it soon became apparent that Cottage Farms’ existing mixed fleet of gas-powered and traditional lead-acid battery powered pallet trucks and counterbalance forklifts were simply not up to the demands – both operationally and environmentally – of the job they were expected to perform.

As they were required to be fully charged to stand a chance of completing a full shift without recharging, the charging area for the existing fleet of lead-acid battery powered trucks occupied a considerable amount of warehouse space. Furthermore, the operatives had ruined six lead-acid batteries over a period of five years by opportunity charging them in an attempt to get them to last a full shift, costing Cottage Farms a considerable amount in replacement batteries. 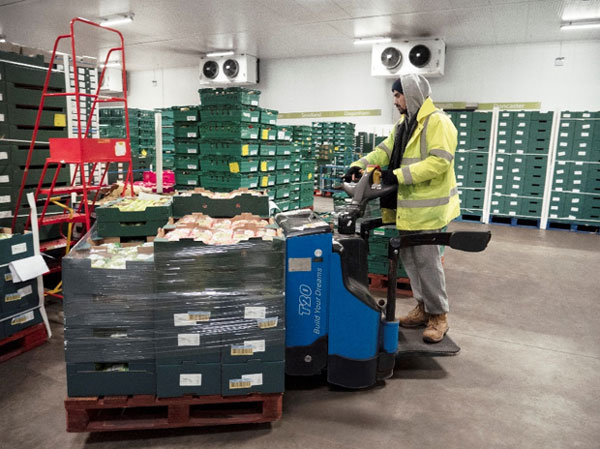 Browning and Monteath evaluated the working environment at Cottage Farms, and concluded that a switch to BYD equipment would bring a number of benefits. Operating a two-shift system, the charging profile of BYD’s unique Iron-Phosphate batteries particularly suited the tasks they were required to perform at Cottage Farms.

“A switch to BYD was of immediate interest to me – it has promoted opportunity charging and helped us a great deal within our business,” says Browning. “It means we have more availability from the material handling equipment we have, and it means shorter hours in the warehouse.”

Using BYD’s rapid-charging technology, the equipment can now be topped-up with a short opportunity charge during an operative’s lunch or tea break to ensure it can comfortably work at maximum capacity for the duration of a full shift.

Previously, Cottage Farms had 25 different chargers; with the BYD fleet, it needs only as few as nine. As BYD chargers are interchangeable and not equipment-specific, costs are reduced by not spending money buying a charger for every truck, and much of the space previously used for charging is now used for storage.

“The biggest benefit of the BYD fleet is the charging time,” says Browning. “We get almost 1% per minute of charging. That means we can move from 40% charge to full charge in less than an hour. That helps us a great deal when we are looking at the utilisation of the trucks. It means we can benefit from fewer trucks within the fleet. Since taking on the BYDs, we’ve reduced the total fleet number by three and we’re now looking to reduce it by another four. At the same time, we’re still outloading the same number of boxes as we were the previous year. 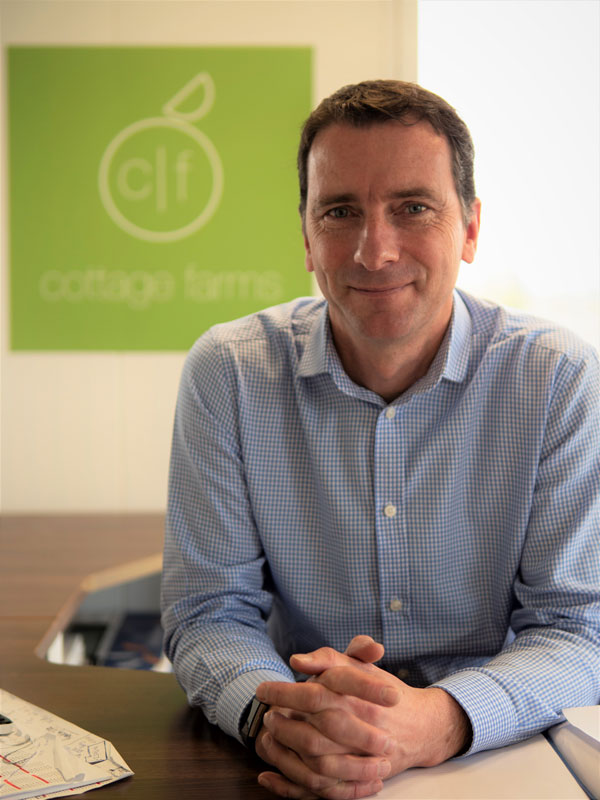 “We have already saved in the region of £18,000 per year just on that one element, before even looking at the saving in electricity and the saving on the servicing.”

The reach trucks work with the newly-installed mobile racking, lifting containers of top fruit to a three-stage height and working throughout both shifts to provide product for the pack house. The counterbalance trucks perform mainly loading and unloading operations, both inside the facility as well as outside in the yard in all types of weather conditions.

It’s not just Cottage Farms’ senior management that are praising the trucks. They have been well received by the operators, too. Operations Manager Georgi Belov is responsible for overseeing the BYD fleet. Prior to the switch to BYD, Belov says the lead-acid batteries were running out of charge before the end of the shift, and he felt their environmental profile wasn’t right for a food packaging business.

“Now, we do not run out of power,” says Belov, “and the equipment we use is probably the best on the market for the business that we run. Making the decision to go to BYD was the best decision we made.”

Of the operators, he comments: “They prefer the BYD equipment to the old type of equipment we had. They like that it is ready to use at the point when they need it, speeding up our process of packing and dispatching. We don’t have to wait for some of the equipment to be charged to finish the job. Also, they like the controls of the equipment – it’s very easy to operate, and most operators are doing their jobs a lot quicker than we used to do. 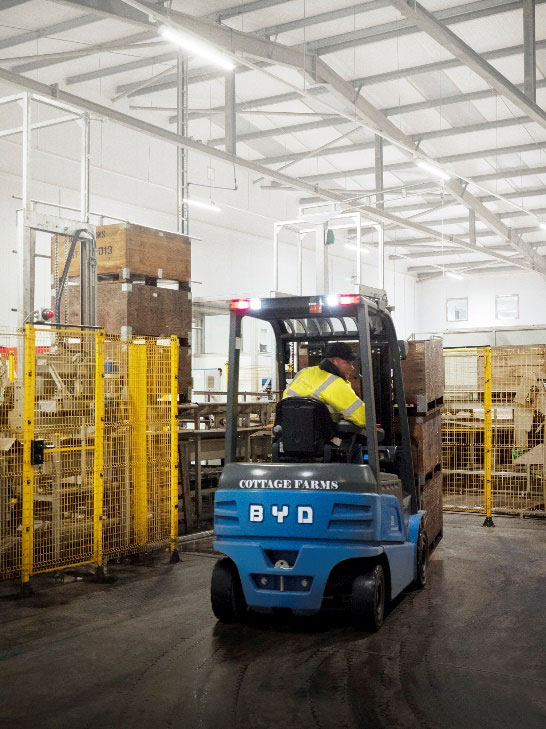 “We used to dispatch fruit sometimes until midnight, and the reason was because we didn’t have suitable equipment to finish the job. But now, everything is done and dusted by six or seven o’clock in the evening and everybody is happy to be going home on time.”

He concludes: “As soon as we took on the BYDs, we never looked back. The trucks are amazing, the support from the supplier is great, and the service… we never, ever had a problem with that.”

With Stacatruc having been appointed a BYD dealer in 2017, Monteath was part of a team evaluating existing contracts for their suitability as a BYD customer. With Cottage Farms working in the food processing sector, it was an obvious candidate.

“By engaging with Chris in a full costing exercise, we were able to give him the best-possible figures and a true lifetime cost of the contract,” says Monteath. “We took into account everything – how much he pays for distilled water, the labour element of someone having to put that distilled water in, the cost of charging, the cost of LPG when versus the kW/h costs…

“We effectively demonstrated that the BYD product would save money and offer greater efficiency. Chris was hesitant about the use of electric trucks in the yard, but the BYDs have overcome that. In fact, their ability to be opportunity charged means they run longer than the gas trucks they replaced.”

As well as convincing Browning of the productivity benefits derived from the greater availability and uptime of the fleet, Monteath has also helped Cottage Farms to reduce the overall number of material handling equipment units at the site.

“The original fleet size was in excess of 28 machines,” he says. “We felt that we could get that down whilst also increasing productivity. Cottage Farms previously had additional units as back-up for lead-acid units that were failing to hold a full charge. It meant he was taking on more equipment than actually required to carry out his operations. We calculated that we wouldn’t need to change all 28 units from standard lead-acid over to BYD – we were confident we could get that down to a more manageable number and save money for Cottage Farms in the process.” 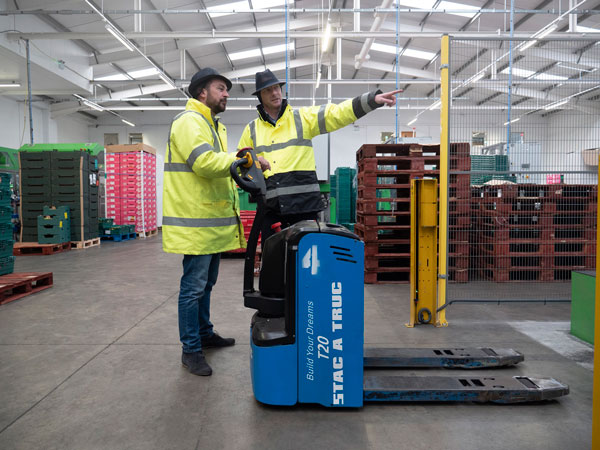 Stacatruc produced a quotation showing what Cottage Farms would save over the course of the contract. With BYD offering an industry-leading eight-year battery warranty – something it can offer with assurance as the batteries are fully sealed, thus preventing damage and spillages – it enabled Cottage Farms to take out a seven-year contract at a weekly rate that compared very favourably to what it was paying previously.

Monteath sums up: “The units we’ve been able to reduce, the productivity we’ve been able to increase, the costs that have come down, and the less frequent visits from our service engineers all add up to prove that the BYD product is very well suited to the food industry, to the fruit and veg industry, and to Cottage Farms in particular.”

Browning agrees: “The decision to move across to BYD was, actually, a very easy one to make once we nailed the numbers and the financials. The main importance for me was that we were actually getting a robust solution to what we needed.

“The introduction of the BYDs has enabled us to change the way we run the warehouse. We have seen nearly a 35% reduction in cost per box sending the pallets out, that is together with the way we changed the warehouse – the BYDs were the catalyst for us to be able to do that. 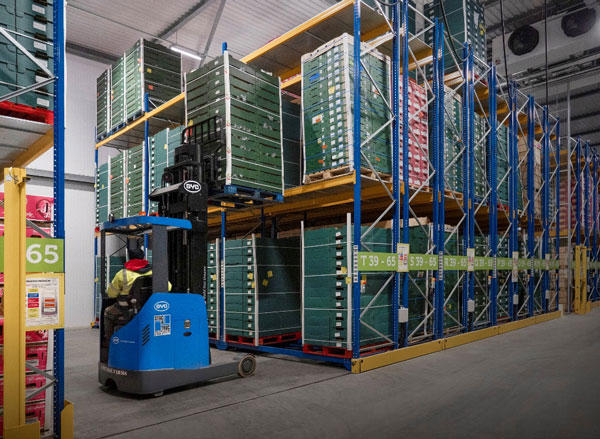 The introduction of BYD reach trucks to its warehouse has enabled Cottage Farms to reduce per-pallet storage and dispatch costs by almost 35%.

“The experience with BYD has been excellent. The product itself is very, very good; we’ve had no issues with them and the service and support we have had from Stacatruc has also been very, very good.

“I have an environmental want to progress the business, and also the way the business is seen from the outside. Environmentally, the batteries we now use are far better than lead-acid. I also have a want to reduce my carbon footprint. Both have been achieved by utilising BYD.”

We use our own and third-party cookies to ensure the proper functioning of the web portal and its complements, perform navigation analysis and show multimedia content. If you continue browsing, you accept the use of this technology. For more information please see our Cookies Policy I agree. Política de Cookies